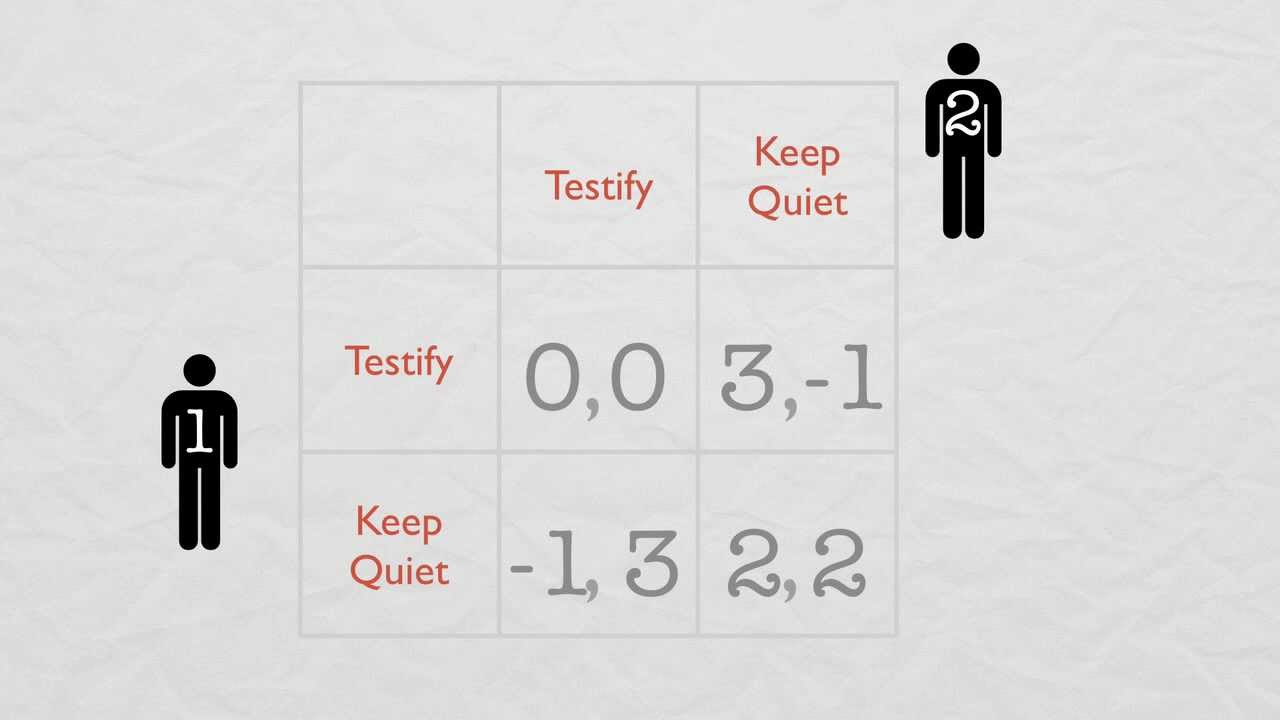 Game theory is the study of human behaviour in strategic settings. It is used to solve some of the harder problems in economics.

So what is a game? To have a game, you need at least two players, sometimes called agents, or, if you want to be really crazy, people. And you need payoffs for the players, you need to define the outcomes they can potentially get depending on how the game unfolds. And finally, you need rules for the game.

Now let’s look at the most famous game in game theory, the Prisoner’s Dilemma. There are two prisoners, prisoner 1 and prisoner 2, and they each have a choice. They can testify against the other, or they can keep quiet.

If they both keep quiet, they both get off with a light sentence, which I’ll represent with a payoff of 2. Prisoner 1’s payoff is on the left, prisoner 2’s is on the right. If they both testify, they both get a moderate sentence. I’ll represent the moderate sentence by a payoff of 0. Right about now, keeping quiet is looking like the best option, but there’s more to this game. If one testifies and the other keeps quiet, the one who testified will get off scot free, and the one who kept quiet will get an extremely harsh sentence; they’ll throw the book at him.

Think about this game for a moment. Keeping quiet looks like a pretty good option if both prisoners could promise not to testify. But these prisoners only care about their own self-interest. So, both prisoners may tell the other they pinky swear not to testify, but they won’t keep that promise. If prisoner 2 keeps quiet, prisoner 1 is better off testifying. If prisoner 2 testifies, prisoner 1 is better off testifying. Testifying is a dominant strategy for both players, so both testifying is the dominant strategy equilibrium.

The prisoner’s dilemma comes up in all sorts of situations. For instance, instead of prisoners our players could be, say, oil companies. If both set a high price they can sell for a high price, but each one has an incentive to undercut, in which case he will capture the entire market. The equilibrium outcome is for each company to charge a low price.

How to Scan for Virus Online

admin - June 17, 2020 6
Follow this step by step guide to scan for viruses online. Download the bitdefender extension and check if your computer is infected or not. Don't...